What About The Godhead and The Trinity....

Here we tackle something which is important for Christians.  However it’s almost inexplicable, perhaps beyond the extremities of our grasp.  Having done our best to explain the Trinity we have to take it by faith - we have to believe it.

God makes Himself known in three persons; as The Father, as The Son (Jesus) and as The Holy Spirit.  Yet the Bible makes it clear that God is ONE.  (Listen, O Israel! The Lord is our God, the Lord alone. [...or one...]  And you must love the LORD your God with all your heart, all your soul, and all your strength. Deuteronomy 6:4-5).  People may think and act otherwise, but there is no multiplicity gods.

The word Trinity does not appear in the Bible but the word Godhead or Deity is used in major translations.  For example in Colossians 2:9 NIV we read: For in Christ all the fullness of the Deity lives in bodily form...

Godhead is defined as the essential being of God; Almighty God, the Sovereign God, the Supreme Being - the Holy Trinity of God the Father, the Son, and the Holy Spirit. 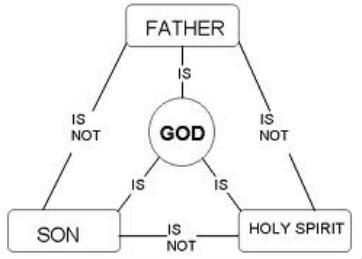 Since the 12th century scholars have used versions of diagrams like this to try and make the Trinity / the Godhead understood.

Long before diagrams were drawn a scholar, Athanasius, tried to clarify the Trinity in a statement of faith, a creed.  He wrote: .....we worship one God in Trinity, and Trinity in Unity; for there is one person of the Father, another of the Son, and another of the Holy Spirit.  But the Godhead of the Father, of the Son, and of the Holy Spirit is all one, the glory equal, the majesty coeternal.

There’s more to the Athanasian Creed than that, you can look at it under creeds if you wish.

Yes, we find the Trinity, the Godhead hard to put into everyday language.  These are our attempts to bring together what the Bible says.  They’re the best ways we know of explaining what we believe.