Baptism is not unique to Christianity.  It was used even before the time of Jesus.  The meaning of the baptism differed according to whoever practiced it.

Most Christian Churches practise baptism but they do not all hold the same understanding of the act.  People also speak of Christening but this is common parlance which Churches do not normally use.

For many Churches baptism signifies admission into the family of God.  By such baptisms some assume that the act saves people [adult or infant] from sin and admits them to God’s family.

Like many Churches we practice what is known as Believer’s Baptism.  That is to say those who present themselves for baptism will be of an age to understand what is happening and why.

They will have recognised the impact of sin on their lives and will have confessed their sin to God; they will have asked His forgiveness, trusting in the death and resurrection of Jesus as the means of their salvation.  They have become BELIEVERS.

The Holy Spirit will have entered their lives.  In Jesus Christ’s terms, they will have been born again of the Spirit.  They will have already become members of God’s family (called, The Redeemed).  They know Jesus as their Lord.

These are the Believers that we are happy to baptise. 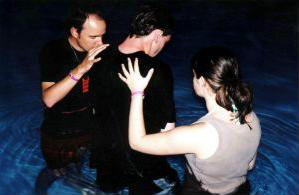 Our baptismal pool is built into the floor at the front of the sanctuary.  It is large enough for three large people to stand in together.  Two, usually the minister and a deacon, baptise the candidate.

We can baptise incapacitated people by pouring water over them but normally we plunge the candidate into the water for a few seconds so that they are totally immersed.  By this act they testify that as Christ Jesus died, was buried and rose again, so they have died to sin and have risen to new life in Him.  Now they live for Him.

This is a symbolic act in which Believers follow the example of their Saviour.  They also obey His instruction as He told His disciples: go and make disciples of all the nations, baptizing them in the name of the Father and the Son and the Holy Spirit.  Teach these new disciples to obey all the commands I have given you.  Matthew 20:19-20